Controversial plans to build a huge new Primark over public highways, a listed building and Market Square in Central Milton Keynes are doing nothing to improve the image of the Prudential pension fund, or Primark, who back the scheme. But this weekend the bosses of the shopping centre are repeating a risky step, which involves swamping an official public consultation with questionable submissions.

The bosses of centre:mk, which runs the shopping centre, have already sent in  3, 000 postcards to MK Council, claiming they are “in full support” of their planning applications. And they’ve got staff out in force again this weekend armed with thousands more cards.

Lobbying is one thing but this is different.

Eye-witnesses say they are deliberately targeting young shoppers with little or no attempt to give them the facts.  But saying yes to Primark is not the same as saying yes to building on this particular site and damaging access, amenities and important Modernist architecture.

As one witness put it:

“I might, for example, sign up to a canvasser asking if I’d like a Premier league rugby club here.  But it doesn’t mean I’ve automatically voted for them tearing up Campbell Park to build the stadium!”

In contrast, Xplain volunteers have spent many hours talking to people of all ages and offering standard letters of objection. The letters offer rational, factual information for people to sign up to.

So far, we’ve delivered over 1,000 to MK Council and we’re confident this is the genuine voice of the people.

Crucially, wealthy businesses spend years lobbying for their developments, whereas we, the public, only have a few weeks to have our say. I wonder if Primark and the Prudential are proud of the centre mk’s behaviour? Do they even know about the risk to their reputation? 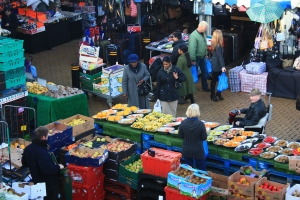 MK Market – a social hub under threat from Primark development

If you want to object or comment on the plans you can register on the planning site or simply email the senior planning officer via alex.harrison@milton-keynes.gov.uk