The centre:mk wants to demolish Secklow Gate, prime gateway to Milton Keynes. Hammersons wants to demolish the iconic Point, Britain’s first multi-screen cinema. And Legal & General, whose fashion quarter has already broken the back of Midsummer Boulevard, wants to kill it off altogether by building shops over an eco-friendly public transport and pedestrian route.

Why, when there are prime development sites waiting for investment nearby?

The answer is that CMK retailers are in panic mode. Spooked by new regional shopping centres such as Westfield, and new out-of-town centres such as MK1, at the local football stadium, they are prepared to blow up public highways and chop down trees simply to extend their existing retail fortresses.

It doesn’t seem to matter if they disrupt traffic, cyclists, pedestrians and the disabled. They are more than ready to turn CMK into a series of old-fashioned, inward-looking retail malls where people shuffle round from one chain store to another, losing track of time, the outside world and possibly the will to live.

Ironically, this is precisely the boring old model that the original architects successfully smashed to bits in the 1970’s when they designed MK’s astonishing shopping centre, now a Grade 11 listed building. Unlike the gloomy, fortress-like Arndale Centres and Brent Crosses of the day, Stuart Mosscrop’s sleek, minimalist shopping building was flooded with natural light. People were constantly connected to the outside world, both visually and physically, 24 hours a day.

A Zen-like, harmonious structure of steel, glass and marble, it still lifts the spirits with its living greenery and contemporary sculptures.

At first, the shopping building was not a privately owned mall but a top quality, weather-protected High Street for the citizens of Britain’s most ambitious new town. And for years it was a huge success, attracting people from all over the country.

As well as chain stores there were small shops, a market, pubs and generous public spaces. Queen’s Court, with its pool and fountain, and Middleton Hall, the size of Euston Concourse, were great spaces where people could relax, or catch an event, from sumo wrestling to ballroom dancing.

But times change. Our magical public building was sold and is now branded as thecentre:mk. Shadowy pension fund managers in London demand more and more profit. In 2010 Queen’s Court lost its superb fountain and gained some eateries instead. Even on a sunny day it’s now a bleak, empty place where people rarely linger.

Perhaps this is one reason CMK has slipped down the retail league table.

Retail bosses are perplexed. As they contemplate the sterile places they have created, they agonise about increasing “dwell time” and experiment with more free events. A sculpture gallery, temporarily set up by the MK Public Arts Trust near John Lewis’, was one of the better ideas.

At last, they seem to realise that people want more than just “shop till you flop into a Costa Coffee” malls. Ironically, this is something the original architects understood perfectly well, over 30 years ago, and designed into the architecture. The features are still there, waiting for the kiss of imagination to bring them back to life. 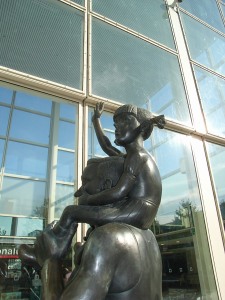 MK was designed on democratic ideals

So what is the long-term answer? Tragically, spooked by current retail wars, the bosses of the centre mk and Midsummer Place simply plan to build more chain stores over public boulevards and gateways.

Judging by the objections so far, thousands of local people are furious. They don’t want to break up the highly efficient grid road system, build over Market Square and chop down boulevard trees.

If only the pension fund managers respected MK’s democratic history and principles they would not be making so many enemies. And ordinary citizens would not be fighting to keep the dream alive, caught, as they are, in the cross-fire of retail wars.