18/06/18
The Parks Trust has withdrawn a controversial application to plant two huge billboards at the gateway to Campbell Park after irate residents described them as “completely over the top and tasteless” and “an acute waste of money”. One objector said “We are talking about Campbell Park, the serene heart of MK where sheep graze, not Blackpool Pleasure Beach!”

Mock-up of the two billboards

According to the Parks Trust the two billboards, each covering four square metres, would be “large enough to be visible from across the V8 grid road, encouraging visitors to cross the pedestrian bridge and visit their premiere city centre green space and the MK Rose.”

The billboards would also obscure views of CMK

But landscape architect Neil Higson, who originally designed much of MK’s landscape, warned that “this brash act of commercialism” could have the opposite effect. Ward Councillor Ric Brackenbury told planning officers he had been “inundated” with complaints from residents and was concerned that the billboards could set a precedent. 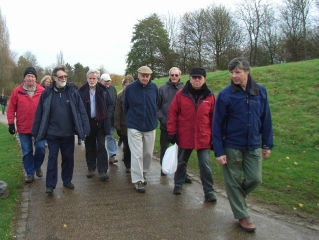 Xplain has welcomed the Parks Trust’s decision to reconsider its plans and hopes that it will let the quality of the landscape speak for itself. With lots of new development arriving around Campbell Park, including Hotel La Tour, the upgraded MK Gallery and the new Campbell Wharf marina there will be more than enough people to visit this beautiful park.

And it’s not only locals who appreciate Campbell Park.

“It is one of the largest and most imaginative parks to have been laid out in Britain in the later 20th Century and is probably of national significance,” says a recent study by the Bucks Garden Trust. “The detail of the materials, types of horticultural features and planting all work together with the natural and artificial topography to produce an outstanding, unified design.”*