Did you know that retail giant Intu can stop you using the public concourse in Midsummer Place? Reasons include: wearing a hood, having a dog, sitting on something, shouting or anything else they decide is “inappropriate behaviour”. 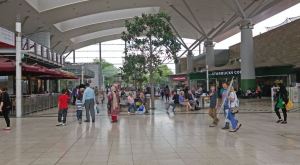 your pavement – or theirs?

Now the same business is preparing to privatise even more public space in the heart of Milton Keynes.

Recently Intu tried to stop a Guardian journalist who was on a working visit to Milton Keynes. His transgression? He had paused to write in a notebook. And although he was standing in a public plaza Intu’s security guards felt perfectly entitled to challenge what he was doing. Naturally, the journalist stood his ground, and described the incident in a timely article called “The struggle for the soul of Milton Keynes.”

But MK is not alone. This is what happens when councils hand over public highways to private developers. What you think is a right – to take a photo, gather with friends, or simply walk along the street – turns into a gift; a gift that can suddenly be taken back in the name of ‘growth’.

Last year Intu triggered huge conflict over its plans to build new shops over much of the open space inside Midsummer Place, even as development sites lie empty nearby. Intu trills ‘It’s a New Dawn’. Xplain says “It’s a naked attempt at a land-grab”.

Public protest outside Intu – a thing of the past?

Now, Intu has gone one further and applied to ‘Stop Up’ much of the internal space and parts of the public highway.  If approved, Intu will not only be able to stop members of the public using the concourse but the space outside it too! No more public highway on which to linger or – heaven forbid – protest. We can also kiss goodbye to any prospect of running a new public transit link, between the train station and the rest of town, as the preserved transport route would be cut off.

Normally, the public would have time to consider all this if the planning application were to be ultimately approved, following September’s public inquiry. But Intu are in a hurry, and by filing the Stopping Up order now, the public has to gather its thoughts straight away.

So, if you object to handing over more public open space to Intu, and the rights and opportunities that go with it, please send your views to the Department of Transport by midnight, Weds June 15th.

The applicant will probably email you and try to encourage you to withdraw your objections. But you do not have to reply or go into details; like the Guardian reporter – you can simply stand your ground.

Objections need to focus on transport and access, for eg:

Remember: it’s case no. NATTRAN/SE/S247/2306. Send your email by midnight, 15 June, to NATIONALCASEWORK@dft.gsi.gov.uk

7 thoughts on “Intu tries to stop Guardian journalist in Milton Keynes. Could you be next?”