25 Feb 2016 …It might be within earshot of a hospice, Peace Pagoda and Milton Keynes’ best known beauty spot but plans to build a concrete plant near Willen Lake are set for approval on 3 March. 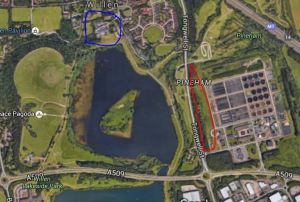 Last year MK Council officers refused similar plans due to noise but the developer has dropped the noisiest element – a concrete crusher – and now officers are recommending approval. And yet – this plant, 200m from homes, would operate 12 hours a day, Mon-Fri, and 7am – 1 pm on Sats. It will be open for deliveries from 6 am, seven days a week, and generate 240 truck movements a day. HGV’s will handle hundreds of tons of aggregate, soil and even granite for recycling and processing into “wet batched concrete on site through mixing aggregate with cement, water and admixtures.”

A possible customer of the plant would be MK Council as most of the waste materials are generated in MK. Recycling may be great but with so much at stake lots of people across MK are saying this is completely the wrong location. So far 2,500 people have signed the petition to stop the plant